Candida Albicans: What is it and how to get rid of it 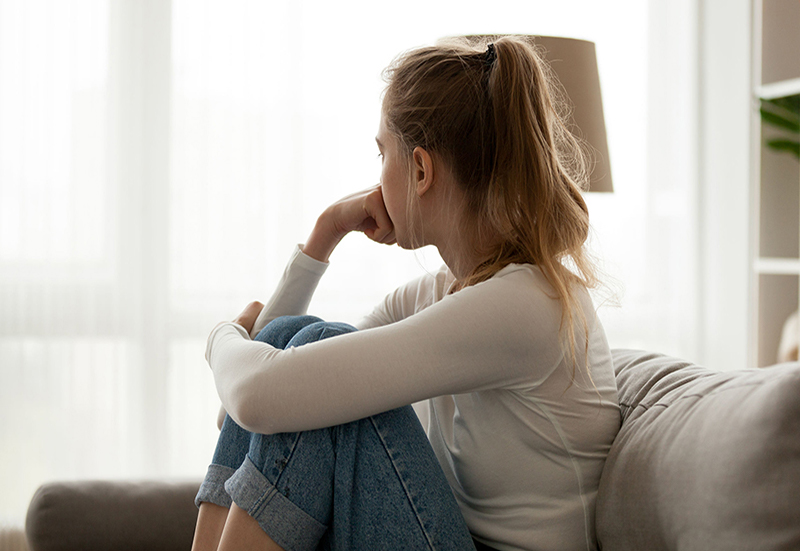 Anyone who ever had the pleasure of dealing with a yeast infection knows that its actually no pleasure at all. Candida albicans (C. albicans) is one of the most common human fungal pathogens that can cause such an undesirable yeast infection. Even though Candida can lead to a variety of diseases affecting different tissues in the body, vaginal infections are the most common ones. In fact, they affect up to 75% of the women at least once in their lifetime [1].

What many people dont know is that Candida albicans is essentially a friendly commensal  meaning that its lingering on various mucosal surfaces in our body like our gut and mouth without the intention of doing us any harm. It is estimated that 30-70% of us provide a cozy home for Candida [2].

But, like so many things in life, the situation can go downhill quickly: if cell barriers are disrupted or the immune system is impaired, the formerly friendly fungi can start to grow uncontrollably and thus can promptly evolve into an irritating and uncomfortable experience. Diseases vary from common superficial mucosal complaints to not as common life-threatening systemic disorders as the presence of Candida in our bloodstream can trigger a septic shock, with a mortality rate as high as 50% [3].

Candida literally exists in all shapes and sizes  and thats one of the things that makes this fungal pathogen extraordinary and perilous at the same time. You could call it an intelligent super pathogen if you will: It has the ability to adapt in order to avoid the surveillance system of our immune cells and to disseminate through the host. From a rounded yeast cell, the fungus can easily transform into an elongated hyphal cell that is able to permeate the gut lining and colonise other tissues in the body.

In addition, the opportunistic yeast is also highly metabolically flexible, meaning it can utilise different nutrient sources for energy. So, in a nutshell, it will hardly ever go hungry and can easily survive different environments and conditions in distinct niches in the body. All these characteristics make a Candida infection or candidiasis both hard to diagnose and treat. 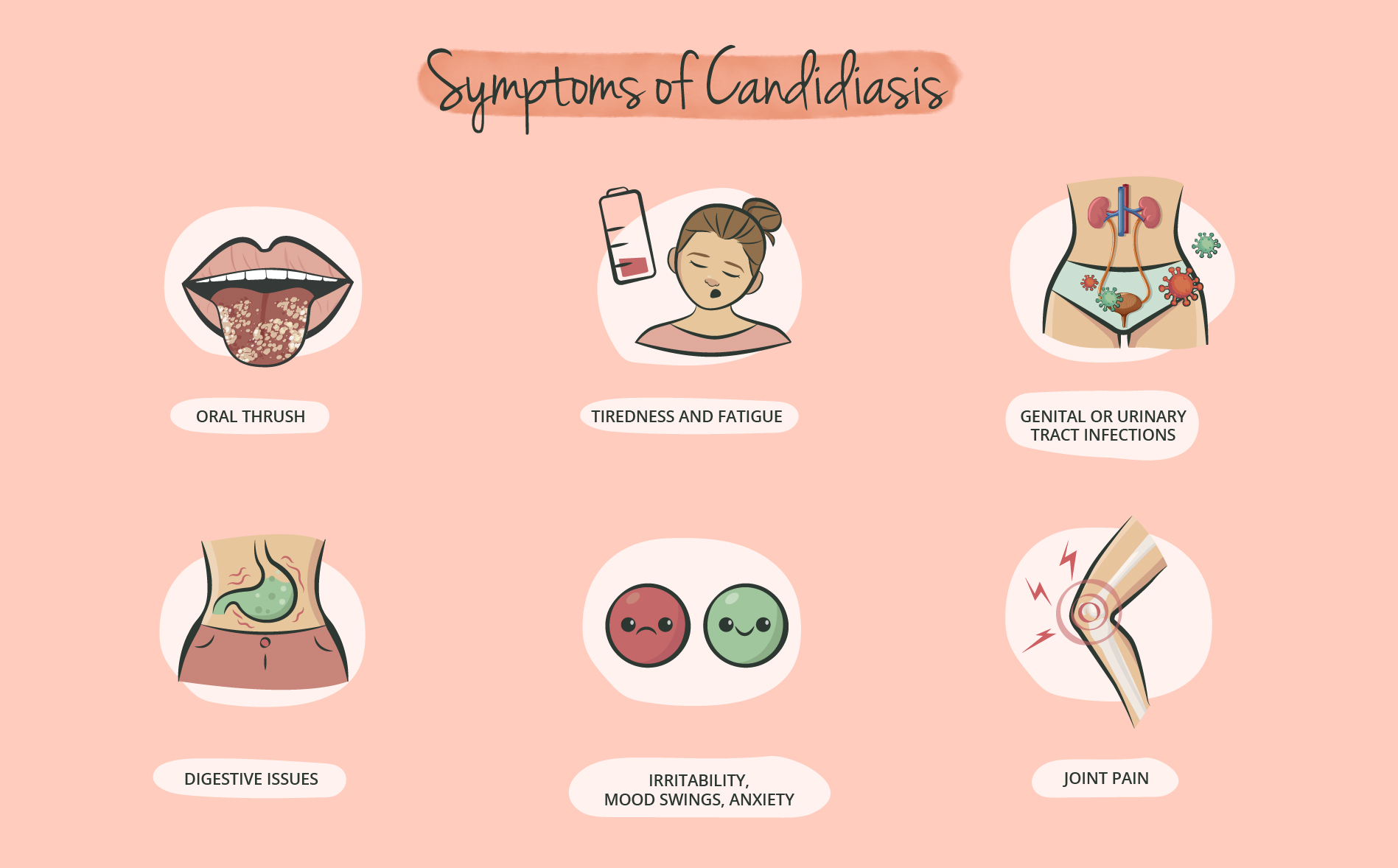 Another striking feature of Candida albicans is its ability to form biofilms, densely packed layers that adhere to mucosal tissues. These biofilms are visible for example on the tongue as white patches- referred to as oral thrush. Thats actually where the fungus got its name from: The Latin word candidus, means gleaming white; and albicans comes from albi-care, which translates to to whiten.

Candida overgrowth can be experienced in various forms nearly anywhere in the body. Other than the mouth, Candida albicans also commonly colonises the skin, ears, reproductive organs and even the thyroid. Hence, symptoms vary depending on the location of Candida overgrowth, ranging from constantly feeling worn down, digestive issues such as bloating and constipation, to skin eczema. Vaginal candidiasis is usually accompanied by vaginal itching and swelling.

Risk factors for a Candida infection

As mentioned, Candida albicans lives side by side with other commensal microorganisms in our body and normally doesnt cause any trouble in healthy individuals. However, there are certain factors that can contribute to its overgrowth. One frequently observed trigger is the use of antibiotics. Antibiotics do not only eliminate the bad bacteria but also those that keep yeast  like Candida  from growing out of control [4].

Alcohol is another prominent factor that is associated with candidiasis, as candida and alcoholism frequently occur together. On the one hand alcohol encourages the proliferation of yeast and on the other hand yeast overgrowth can result in cravings for alcohol  a vicious cycle. Moreover, alcohol has been shown to weaken the immune system [5], which also reduces our bodys ability to keep pathogens like Candida albicans in check.

Speaking of which - people with a weakened immune system from illness or medications are not only more susceptible to infections including candidiasis, they also are more likely to experience a more serious case of the disease. The same applies to diabetics: studies have shown that there was a strong association between high blood sugar levels or poor glycemic control and prevalence rates of Candida infection [6].

How to beat Candida: Its all about lifestyle

Due to the polymorphic nature of Candida, its ability to adapt to different environments and the emergence of antifungal resistance [7], treating candidiasis remains a clinical challenge and the number of available anti-candida drugs is still limited.

Luckily, scientific studies have provided several alternative methods of reducing C. albicans colonisation, including dietary modifications. Popular interventions include the so-called Candida Diet which is a rather strict low-sugar, anti-inflammatory diet that aims to restore the balance of bacteria and yeast, promote intestinal integrity and health and eliminate the sugars that promote Candida overgrowth. The focus lies on non-starchy vegetables, some low sugar fruits, gluten-free grains, and fermented foods, whereas all sources of flour, sugar, alcohol, dairy, and yeast are removed.

Apart from diet changes, supplementation with certain plant-derived compounds can provide additional support. Based on the available scientific findings we developed our Candi-Aid Complex, a supplement that combines plant extracts, probiotics, and specific fatty acids. The highly dosed extracts from olive leaves, grapefruit seeds, black garlic, watercress, and oregano contain essential oils and other phytocompounds with strong anti-inflammatory and antifungal properties [8, 9, 10, 11]. The Caprylic acid from MCT oil was also found to be a highly potent anti-candida compound [12]. Last but not least, we added the probiotic strain Lactobacillus rhamnosus as it was shown to reduce hyphal elongation, a key virulence attribute [13]. Of course, our product should not be considered a shortcut to defeating Candida  its merely designed to act as an additional helping hand in the context of a Candida cleanse regimen. At the end, it all comes down to lifestyle choices

Elimination of yeast infections usually involves antifungal medication. A natural supplement in combination with probiotics and a healthy lifestyle, avoiding sugar, alcohol and chronic stress may be just as helpful- our Candida Complex is completely natural.

8 tips for healthy sleep
We spend around a third of our lives asleep. However, many people find it difficult to get to sleep, or to sleep through the night. Those who sleep less, or sleep badly, are often struggle with concentration throughout the day, have lower energy levels, and are more prone to health problems, such as hormonal imbalances, and becoming overweight. The following tips reveal how we can make sure we are as rested as possible during sleep, and which practices and nutritional supplements can help with this.
Veins  the pipelines of life
Veins run through our entire body, and work in conjunction with our heart. They are the blood vessels that carry blood to the heart. But although they are so important for our body, it is thought that between 20-60% of the UK population suffer from some form of vein weakness. So, what is the cause, and what can be done to combat it?
Cystitis: how to get rid of it in a few simple steps
A burning sensation while urinating, the frequent urge to go to the bathroom and even blood in urine can be signs of a urinary tract infection, also called cystitis. In our blog article we discuss the causes of cystitis and point out ways to prevent and treat this frustrating condition.
The Heart: the Centre of our Health
Across Europe, 45% of all people die from cardiovascular diseases. The reasons for this vary, but lifestyle often plays a major role. So, what can you do to protect your heart health?
News overview
Nutrition & Health
Please login to comment.

Help us to improve!
By agreeing you allow us to integrate the Facebook Pixel.
More in our General Terms and Conditions