Hormonal Imbalance: 8 symptoms to be aware of 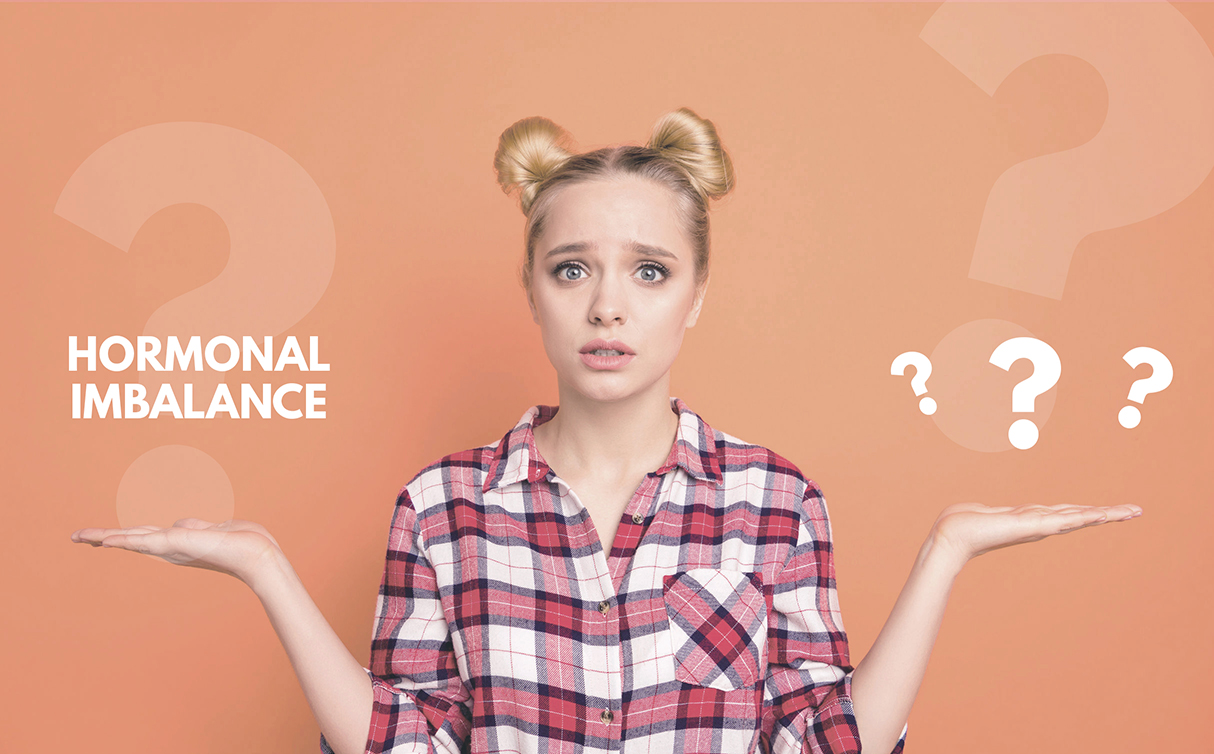 A lot of people suffer from hormonal imbalance, but they are completely oblivious to it.

The term "hormonal imbalance" refers to a condition in which hormone production is altered and the relationships between the various hormones undergo significant changes, but not big enough for these to be regarded as medical conditions.

As mentioned in our previous blog, hormonal imbalances are sometimes completely physiological  for example, they can occur during puberty, menstruation or the menopause - yet these can have considerable consequences on womens health and well-being. Although we know that there could be an imbalance in our hormones, its not always easy to understand what the particular cause of the imbalance is.

So, what happens if there are too many, or not enough, hormones in our body? Well, since hormones are crucial when it comes to regulating some main bodily functions; including metabolism and appetite, sleep cycle, reproductive and sexual function, growth and development, mood and stress levels, an imbalance in hormones can have several consequences. But what are they? Lets have a look

The different phases of a woman's cycle are associated with significant physiological and hormonal changes that often alter normal sleep patterns [1]. This problem may be linked to insufficient progesterone production; if levels of this hormone are lower than usual, it can be more difficult to fall into a deep sleep or to fall asleep at all. Low estrogen levels, especially during the menopause, can trigger hot flushes and night sweats, which can also interfere with a normal sleep cycle.

If you suffer from severe acne, the problem may be related to excessive androgen production levels. Excessively high levels of testosterone lead to an increase in sebum (oily skin), often resulting in the appearance of pimples. In some cases, it can also lead to facial hair growth [2, 3, 4]. This imbalance could also be a symptom of polycystic ovary syndrome (PCOS). In contrast to oily skin, dry skin is often associated with menopause.

This problem can often be caused by an imbalance in progesterone levels, cortisol (also known as the "stress hormone") and thyroid hormones [5]. Additionally, if the levels of these are too high, it can slow down bodily functions and affect energy levels.

Frequent, distinct changes in hormone levels trigger emotional instability, especially in the premenstrual phase (PMS). This instability is reflected with feelings of irritability, anger, sadness and anxiety [6, 7]. Sex hormones also play a key role in postpartum depression; the onset of depressive symptoms that are temporarily associated with the big drop in hormone levels that occurs when giving birth.

As much as lifestyle, diet and exercise are key factors towards maintaining a healthy weight, hormonal balance also plays an important role [8]. Sudden weight gain can be a clear sign that there is an imbalance. Since hormones regulate metabolic functions, high estrogen levels can influence the secretion of leptin: a hormone that regulates the feeling of hunger and satiety. Hypothyroidism (where the thyroid gland does not produce enough thyroid hormones), polycystic ovary syndrome (PCOS) [9] and menopause may also cause weight gain, especially around the abdomen. Other symptoms of hormonal imbalance that shouldnt be overlooked include a constant feeling of thirst and the need to urinate frequently.

Migraines are predominantly experienced by women. They are not only brought on by menstruation, pregnancy or menopause, but also by hormonal contraceptives and hormone replacement treatments [10]. Headaches usually occur before or during the menstrual cycle, pregnancy and the menopause. Fluctuations in estrogen levels affect the vascularization of the brain [11]. 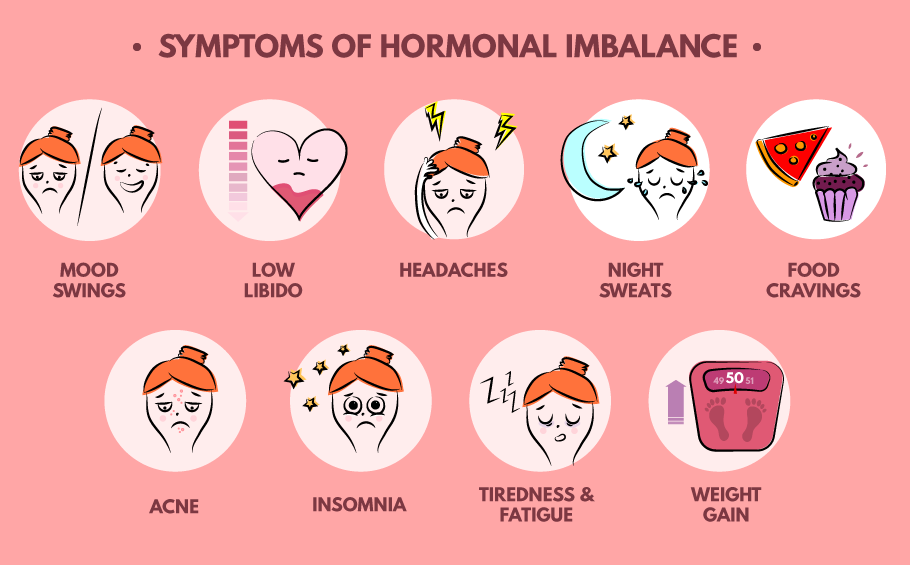 A reduction in estrogen levels causes significant changes to the vaginal wall and mucosa. Symptoms of so-called "vulvovaginal atrophy" (VVA) include vaginal dryness, burning, itching, vaginal discomfort and spotting. All these things affect womens day to day life; also causing discomfort during sex since intercourse becomes more painful rather than pleasant [12]. This mostly happens during premenopause and menopause, but also if hormonal contraceptives (such as the pill) or antidepressants are taken.

Hormonal imbalance can also lower your sex drive; the main reason behind this is the low levels of estrogen and testosterone. Between 20 and 40 years of age, the production of these sex hormones increases, but the production gradually decreases during perimenopause and menopause. Therefore, although it affects women of all ages, the loss of libido is particularly common in women going through the latter.

If you recognise these symptoms and think you have a hormonal imbalance, make sure you consult your doctor who will be able to tell you what tests to do and possible treatments to follow.

S Sacco et. al Migraine in women: the role of hormones and their impact on vascular diseases, PMCID: PMC3311830, 2002 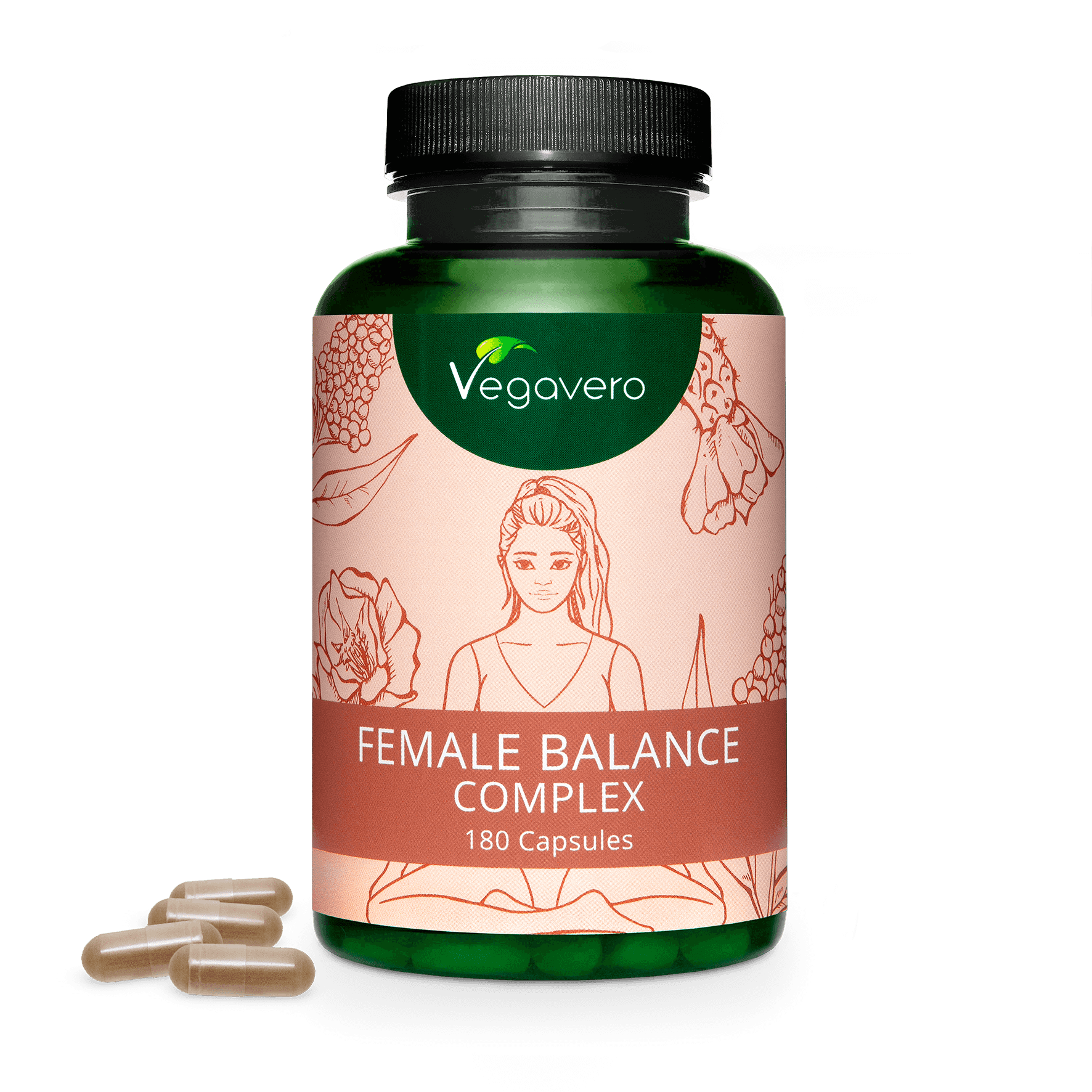 Many women suffer from hormonal imbalances that can manifest themselves as acne, PMS and other hormone-related symptoms. Our complex for women combines chasteberry, lady's mantle and maca extract, with Actrisave for the skin, as well as B vitamins and minerals.

Omega-3 Fatty Acids: Why they are good for you
Omega-3 fatty acids belong to the group of essential unsaturated fatty acids. They must be consumed via our diet because our body cant produce them itself. Read on to find out why they are important and how to adequately meet the daily need.
more ...
Deficiency or no deficiency? Determine vitamin levels with home nutrient tests
Increased stress, one-sided or unbalanced diet, metabolic diseases: these are all possible reasons for a nutrient deficiency that can lead to serious long-term health problems. A vitamin or mineral deficiency is often accompanied by a variety of symptoms, although these do not differ greatly from one nutrient to another.
more ...
Tips for maintaining a regular bowel movement
Hippocrates already understood that all disease begins in the gut. Unfortunately, overlooking the health of our gastrointestinal tract is a common phenomenon  so are digestive issues like constipation. Read on to find out how to help ease these issues.
more ...
Winter blues? Not with us! 6 tips for good mood in the cold season
In todays modern world a lot of people struggle with increased levels of stress, moodiness, or mild anxiety. These conditions are often accompanied by other symptoms like nervous restlessness, sleeping problems and irritability. Luckily, nature offers a range of plants that were shown to be especially helpful with regards to mood balance  which is why we added them to our unique Good Mood Complex.
more ...
News overview
Nutrition & Health
Please login to comment.