Probiotics and prebiotics: What is the difference? 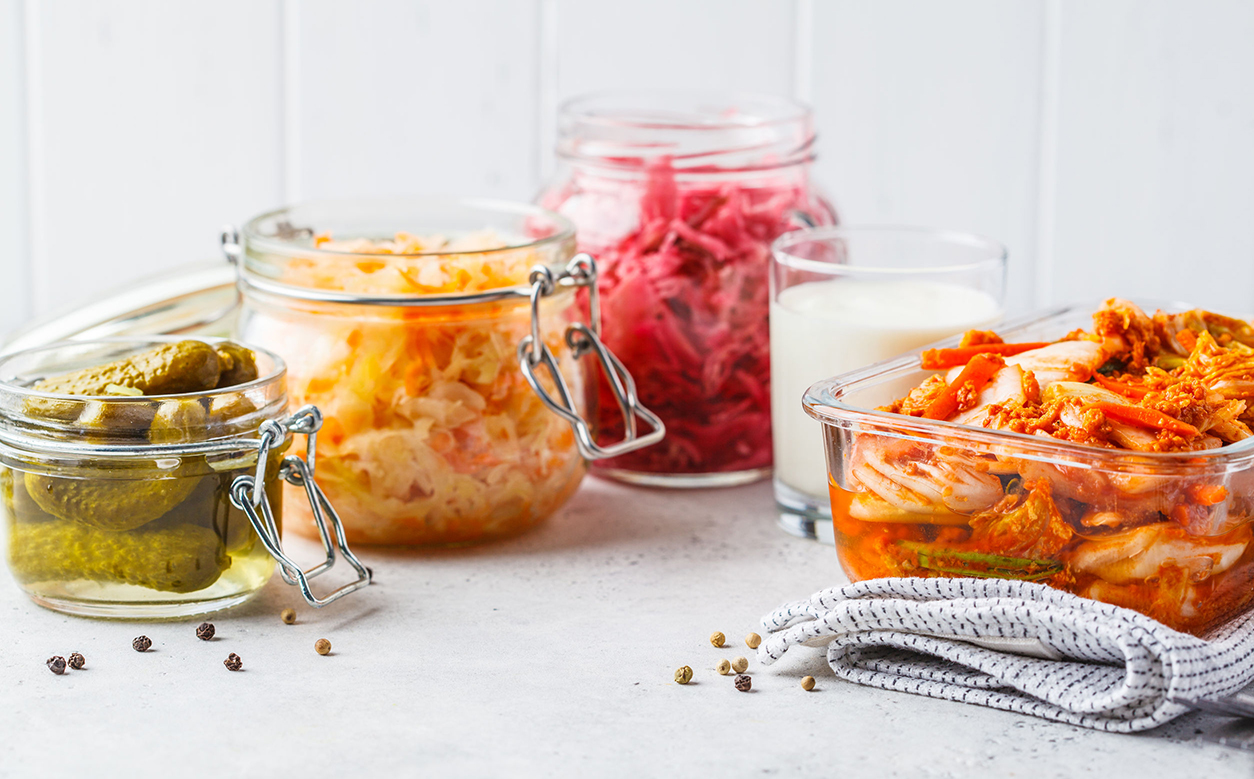 The term probiotics is now familiar to most people. Also, the word prebiotics is being read and heard more and more frequently. The terms seem similar, but they should not be confused. In order to understand the difference between probiotics and prebiotics, it is useful to give a closer look to what probiotics actually consist in.

The word probiotic is composed of the "pro" and "biotic" components of "bio" (life). It is literally translated as "for life" and is therefore the linguistic opposite of antibiotics. As "Anti" means "against", antibiotic literally means "against life". Antibiotics are used to inhibit or kill the growth of microorganisms in the body. Probiotics are said to have the opposite effect [1, 2].

Bifidobacteria or lactobacilli are mainly used in probiotics[3]. They stimulate the immune system, digest and absorb food components and minerals, and prevent the growth of harmful bacteria. Bifidobacteria represent up to 25% of adult bacterial colonization and up to 95% in newborns [4]. The development of the immune system, especially directly after birth, depends mainly on the body's microbiome [5]. Breastfeeding plays an important role in the development of this microbiome, particularly in the colonization of bifidobacteria [6].

Probiotics are often found in the form of probiotic foods. These include fermented foods such as yoghurt (vegan), sauerkraut or kimchi. However, cooking food can cause the death of microorganisms. This is the case, for example, for pasteurized yogurt and sauerkraut, which must be consumed cold if used as probiotics. However, sweet products containing many additives are not beneficial to intestinal health and should be avoided.

If there is a decrease in the "good" bacteria in our intestines due to diseases, drugs such as the antibiotics mentioned above or other external influences, probiotics can help restore the colonization of these bacteria. To better understand the impact of our microbiome on our health, we should take a closer look at how our intestinal flora functions.

Intestinal flora, the microbiome and their importance for our health

In addition to the liver, the intestinal flora is the most active metabolic compartment in the body. In our large intestine, there are more than 1000 different bacterial species [3]. The total number of microorganisms is about 1012, or one trillion organisms [1]. There are both what is called the nuclear microbiome and a variable proportion of microorganisms. The nuclear microbiome is found in every human intestine and constitutes the majority of the microorganisms in the intestine. However, the variable part of the microbiome, as its name suggests, varies from person to person. These differences can be caused, among other things, by different diets [3]. For example, a more diversified microbiome is often detected in vegans than in people who enjoy all types of food. Vegans also often have a higher number of protective and anti-inflammatory bacteria [1]. In addition, differences in the microbiota of thin and obese bacteria have also been found in studies. They had different dominant bacterial cultures. However, there are differences not only in the colonization of organisms, but also in the function of the intestinal barrier[3].

Our intestines are lined with lymphatic tissue, also known as the intestinal immune system. This tissue acts as a barrier to pathogens and toxins, but allows nutrients and liquids to pass through[3]. A disruption of this barrier can lead to diseases such as Crohn's disease or the development of allergies[1]. In addition, a disruption of the intestinal barrier can also lead to the development of the metabolic syndrome. This includes obesity, high blood pressure, lipometabolic disorders and insulin resistance[3]. If the intestinal flora is disturbed by such causes, probiotics can support them and even prevent pathogens from colonizing the intestine [7].

Prebiotics as a food source for our good intestinal bacteria

Prebiotics are non-digestible food components that stimulate the growth and/or activity of bacteria in the intestine [2]. As they are indigestible, they enter the large intestine without being broken down by gastric acid or already absorbed into the small intestine. Unlike probiotics, prebiotics do not contain living organisms, but serve as a food source. Prebiotics are only considered as such if they are ingested only by bacterial strains that have a positive effect on our health. They also stimulate the immune system, increase the absorption of magnesium and calcium and reduce the formation of blood fats such as cholesterol in the liver [4].

Prebiotics are usually multiple sugars or dietary fibres. But not all dietary fibre is prebiotic. The difference is that prebiotics are selective for certain organisms and can only be called prebiotics if they promote the growth of "good" bacteria [5]. Since prebiotics act specifically on certain microorganisms, the intestinal microbiome can be significantly modified [4]. For example, bifidobacteria feed on nutrients such as fructooligosaccharides and inulin [2].

Oligosaccharides (multiple sugars) are among the most important prebiotics. The best known are oligofructose and inulin [5]. They are found in various foods. For example in artichokes, chicory, garlic, parsnips or dried vegetables. Fibre-rich foods are a very important part of a balanced and healthy diet and should be integrated into the daily diet.

In addition to the consumption of foods containing oligofructose and inulin, the consumption of pure inulin is also popular because it is very well documented. It stimulates the growth of bifidobacteria and inhibits the growth of pathogenic intestinal bacteria. As prebiotics lower the pH, the absorption of calcium, magnesium and iron into the intestine is improved at the same time [5]. In addition, inulin has few calories to absorb compared to typical carbohydrates. As a dietary fibre, it also stimulates general digestive activity [8].

The prebiotic effect of inulin occurs from 5 g per day. However, if the body is not used to consuming dietary fibre, mild flatulence may occur, especially at first. Therefore, you should start with a small amount of inulin. This can be increased as soon as you notice that your body has become accustomed to consuming inulin.

Let's take the example of inulin obtained from agave. It differs from other sources of inulin by its chemical structure. A 2015 study questioned daily inulin intake: the daily ingestion of 5 g and 7.5 g of inulin showed a significant increase in the number of bifidobacteria in the stool. It was three to four times higher than in the control group. In addition, the pH value was also lower, which, as already mentioned, improves the absorption of some minerals [9].

There is another term that is associated with pro- and prebiotics and is often read in relation to them. Symbiotics are products that contain both probiotics and prebiotics. The name derives from the fact that prebiotics and probiotics form a synergistic relationship and thus benefit each other. The symbiotic therefore already contains food for the microorganisms used and thus promotes their growth and colonization in our intestines[2].