Forever young? How Resveratrol Influences the Mechanisms of Aging 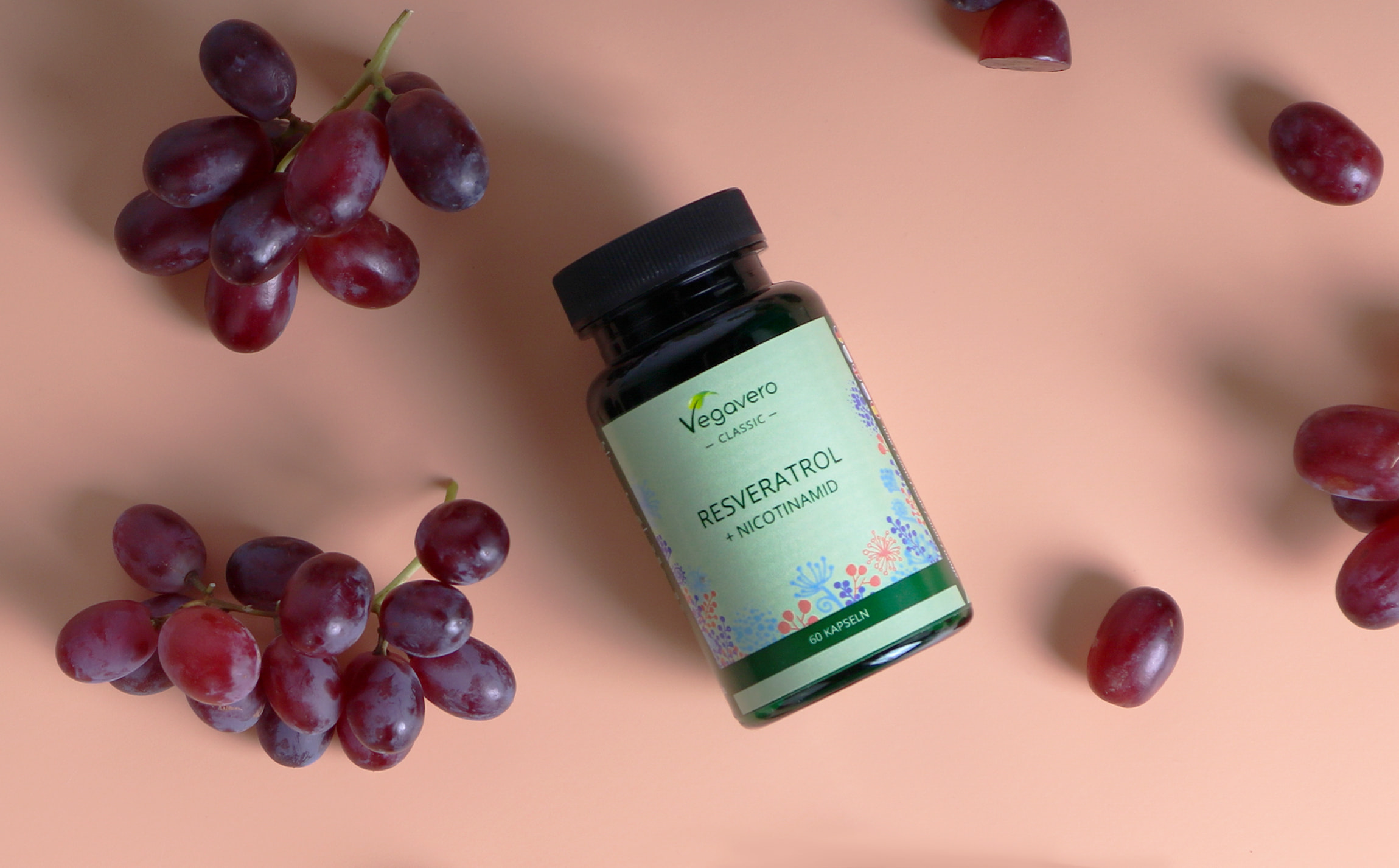 We all have noticed and most likely already used them  the beauty products and supplements that promise firm, wrinkle-free skin and everlasting youth. But, as we all hopefully know, most of these products promise more than they can deliver. Nonetheless, there is one fascinating substance that stands out when it comes natural anti-aging agents and that is resveratrol. But before we get into the details about how resveratrol can influence the aging process, we should take a quick look at what the term aging actually implies.

Mechanisms of Aging: The Power of Our Telomeres

Aging is not all about how our skin looks like. It goes far beyond that as not only our skin ages but all other organs, too, which brings with it a variety of human ailments. To find the underlying cause of aging we have to dig deep  in fact, we would have to look deep inside the smallest independently functioning unit of our body: the cell. Cells harbor our precious DNA or deoxyribonucleic acid, which holds the Code of Life that determines how our body looks and functions.

DNA is not just floating around in our cells  it is packaged into compact structures called chromosomes that reside in the cell nucleus. So-called telomeres cap each chromosome, protecting them from damage. However, shorter telomere length is associated with advancing chronological age. In other words: the older we become, the shorter our telomeres will become. Accordingly, the longest-lived species also have the longest telomeres [1, 2] and abnormalities in telomere maintenance are associated with premature aging [3].

Even though telomeres naturally shorten over time, there is a wide range of environmental and physical factors that negatively affect telomere length. Poor sleep quality [4], cigarette smoke and obesity [5] all contribute to accelerated cellular aging, so does increased stress and UV-radiation [6, 7]. So, is there also a way of keeping our telomeres long and thereby increase longevity?

Resveratrol: The Secret to Longevity?

One substance that has gained popularity with regards to anti-aging in recent years and is now being increasingly used in cosmetics is resveratrol. This phenolic compound is naturally found in foods like red grapes and peanuts  as well as products like red wine and dark chocolate (but lets not take this as an excuse for drinking a bottle of wine and eating an entire bar of chocolate every evening).

Resveratrol has been shown to exhibit a number of health-promoting properties. As an antioxidant it can neutralize the vicious free radicals that can also accelerate cell aging [8, 9]. But that doesnt make it more special than other types of antioxidants  or does it?

Besides having antioxidant activity, resveratrol is the most potent activator of the so-called sirtuins. These enzymes play a fundamental role in circadian rhythm, stress resistance, cognitive development, DNA repair, energy metabolism and several other processes including  as anticipated  cellular longevity. Indeed, increased sirtuin levels have been found to extend lifespan in several species and reduce the incidence of age-related diseases, like cardiovascular and neurodegenerative disorders [10, 11, 12, 13]. Interestingly, one of the underlying mechanisms of how sirtuins influence longevity is related to the aforementioned telomeres: sirtuins were found to stabilize telomeres and regulate their length [14, 15]. In summary, higher levels of resveratrol translate to higher levels of sirtuins which ultimately results in increased telomere stability  and we all now know what that implies. 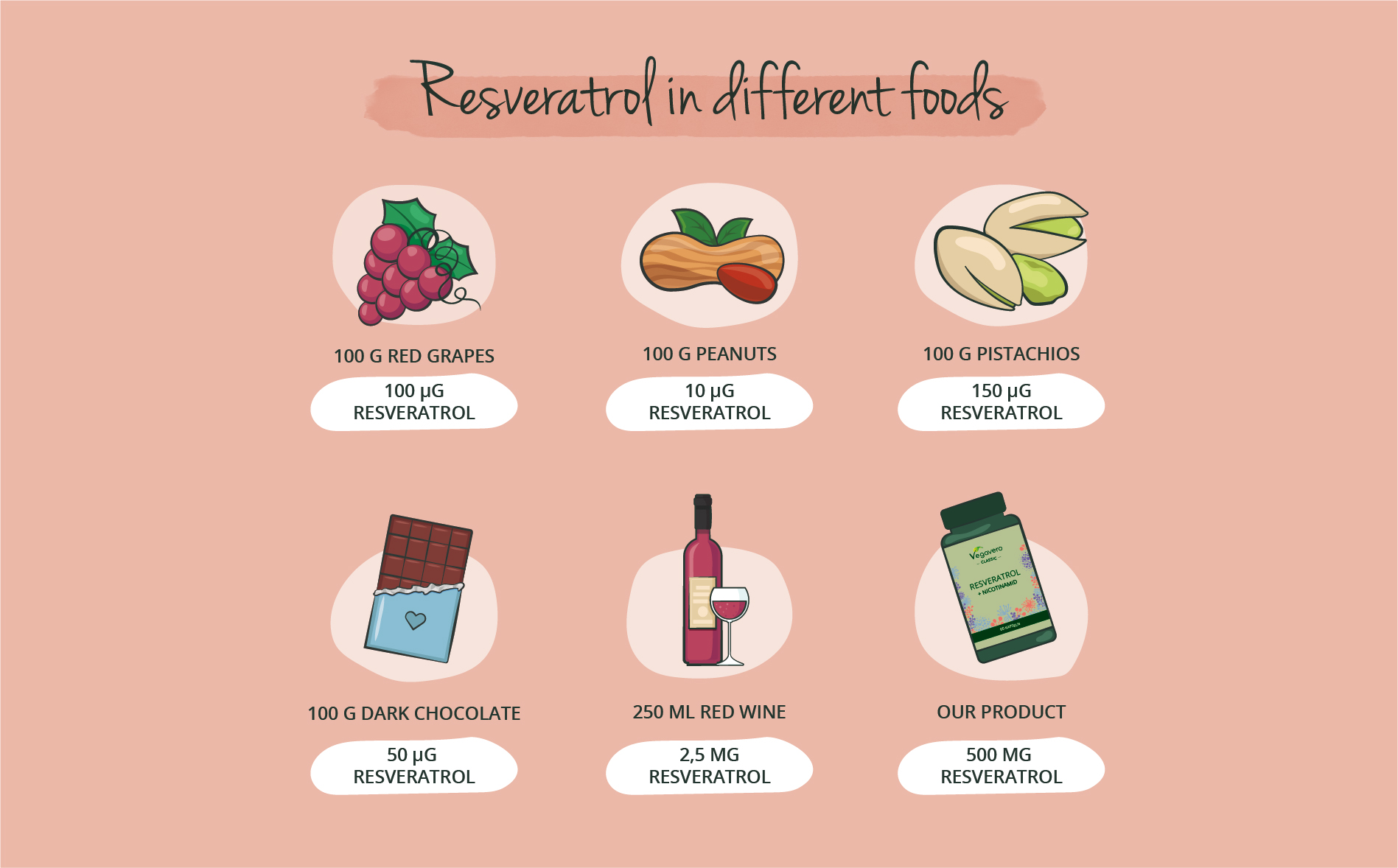 As weve mentioned, resveratrol is naturally found in a variety of foods, but in rather low quantities: on average less than 100 microgram per serving. One plant that has an exceptionally high resveratrol content, though, is the Japanese knotweed (Polygonum cuspidatum or Fallopia japonica). Since its not very common in our latitudes, we decided to simplify things and put it in a capsule. One capsule of our product contains 500 mg of trans-resveratrol  5000 times more than 100 g red grapes!

We also added nicotinamide to our product, a form of vitamin B3. Nicotinamide is a precursor to the molecule NAD+ (or nicotinamide adenine dinucleotide) which is also linked to energy metabolism and cell aging. In fact, the sirtuins we just highly praised can only function in the presence of NAD+. So compared to other simple resveratrol supplements, our product is quite unique and superior when it comes to sirtuin activation and its downstream effects.

Of course, itss not all black and white as aging is a quite complex and dynamic process. Thus, we certainly cannot expect to live forever by just taking a supplement. Still, the benefits of resveratrol supplementation are undeniable, ranging from increased insulin sensitivity, skin protection and reduced inflammation to improved cardiovascular and neurological health, just to name a few [16].

According to scientific literature there are also a few additional things we can do to support the effects of resveratrol and stay young. Studies suggest that physical activity can protect from the negative effects of stress on cell aging: The results of a clinical trial with over 2000 study participants demonstrated that the telomere length of the most active subjects were 200 nucleotides  the basic units of DNA  longer than those of the least active subjects [17]. Especially endurance training seems to be effective in maintaining telomere stability [18] so maybe its a good time to dust off last years running shoes.

Food choices also seem to shape telomere length. While foods that are rich in fiber and vitamins are associated with longer telomeres, consuming processed meals high in unsaturated fats are related to shorter telomeres [19]. So, in the end, aging is a natural process that cant be halted but it can definitely be positively influenced by lifestyle choices. 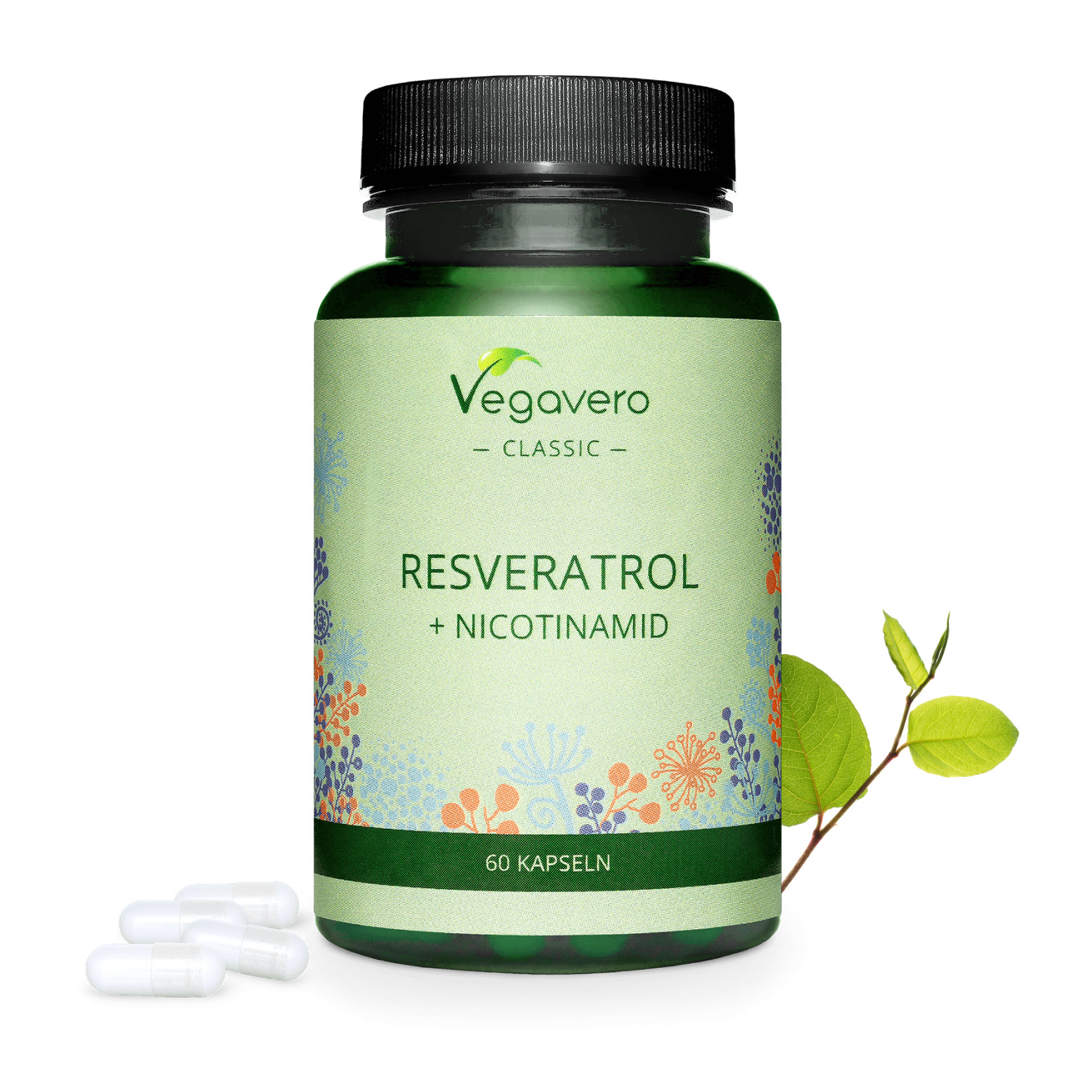 Resveratrol 100% natural from an extract of Japanese knotweed. Enriched with nicotinamide (vitamin B3). Effective anti-aging combination with multiple beneficial properties for healthy skin. Free from artificial additives and vegan.

Quercetin - A Versatile Plant Pigment
Quercetin belongs to the group of polyphenol flavonoids - these are secondary plant substances that are responsible for different color formations in plants. People who are active in sports and those who are plagued by allergies can especially benefit from quercetin.
8 tips for healthy sleep
We spend around a third of our lives asleep. However, many people find it difficult to get to sleep, or to sleep through the night. Those who sleep less, or sleep badly, are often struggle with concentration throughout the day, have lower energy levels, and are more prone to health problems, such as hormonal imbalances, and becoming overweight. The following tips reveal how we can make sure we are as rested as possible during sleep, and which practices and nutritional supplements can help with this.
Veins  the pipelines of life
Veins run through our entire body, and work in conjunction with our heart. They are the blood vessels that carry blood to the heart. But although they are so important for our body, it is thought that between 20-60% of the UK population suffer from some form of vein weakness. So, what is the cause, and what can be done to combat it?
Cystitis: how to get rid of it in a few simple steps
A burning sensation while urinating, the frequent urge to go to the bathroom and even blood in urine can be signs of a urinary tract infection, also called cystitis. In our blog article we discuss the causes of cystitis and point out ways to prevent and treat this frustrating condition.
News overview
Beauty & Wellness
Please login to comment.