Vitamin K  More Important Than You May Think 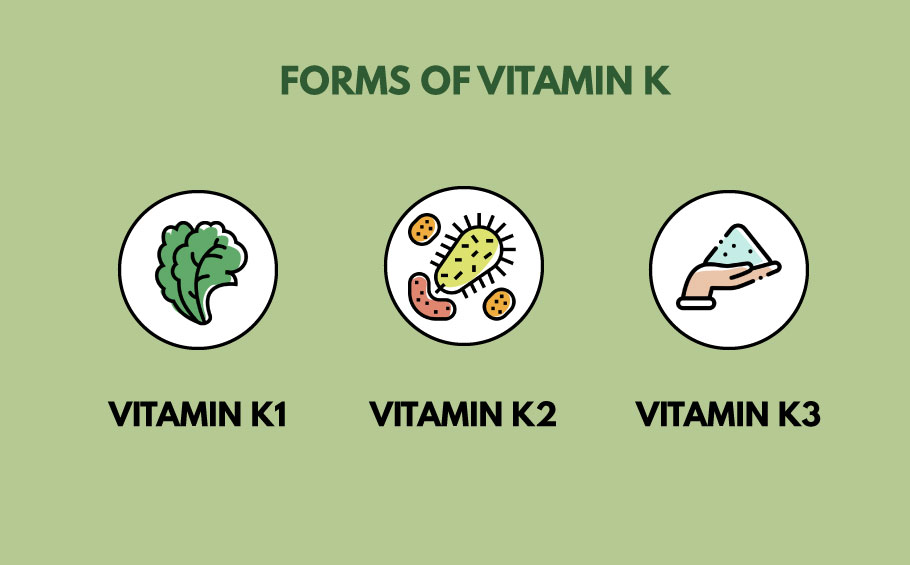 We all know well how essential vitamin D is for our bones. We also recognize the importance of vitamin C. But what is it about that dubious vitamin K? Actually, it is more vital to our health than you might think and should therefore not be neglected in our diet.

What exactly is vitamin K?

Like vitamin A, D and E, vitamin K belongs to the group of fat-soluble vitamins. In contrast to water-soluble nutrients, fat-soluble vitamins are stored in the body - predominantely in the liver. While vitamin A and D can be synthesized by the body, vitamins E and K must come from external sources, for example through our diet.

Similar to vitamin B12, vitamin K doesnt define a single substance, but rather a group of substances, including more than 100 known compounds. However, only the naturally occurring vitamin K forms K1 (phyllochinone) and K2 (menachinone) are relevant for our metabolism. Apart from the natural forms, there is also vitamin K3 (menadione), a synthetic variant of the vitamin.

Vitamin K1 occurs mainly in the green leaves of various plants, like cabbage and herbs. Vitamin K2, on the other hand, is produced by microorganisms. This is why fermented products such as sauerkraut and Natto (= fermented soy beans) are a good source of vitamin K2. Our intestinal bacteria can also produce the vital vitamin. It can then be absorbed directly by the intestinal cells and transported to its destination via the blood. A healthy diet and a healty gut therefore prevent a deficiency in vitamin K. However, certain deseases of the digestive tract can be accompanied by an insufficient supply of the vitamin. 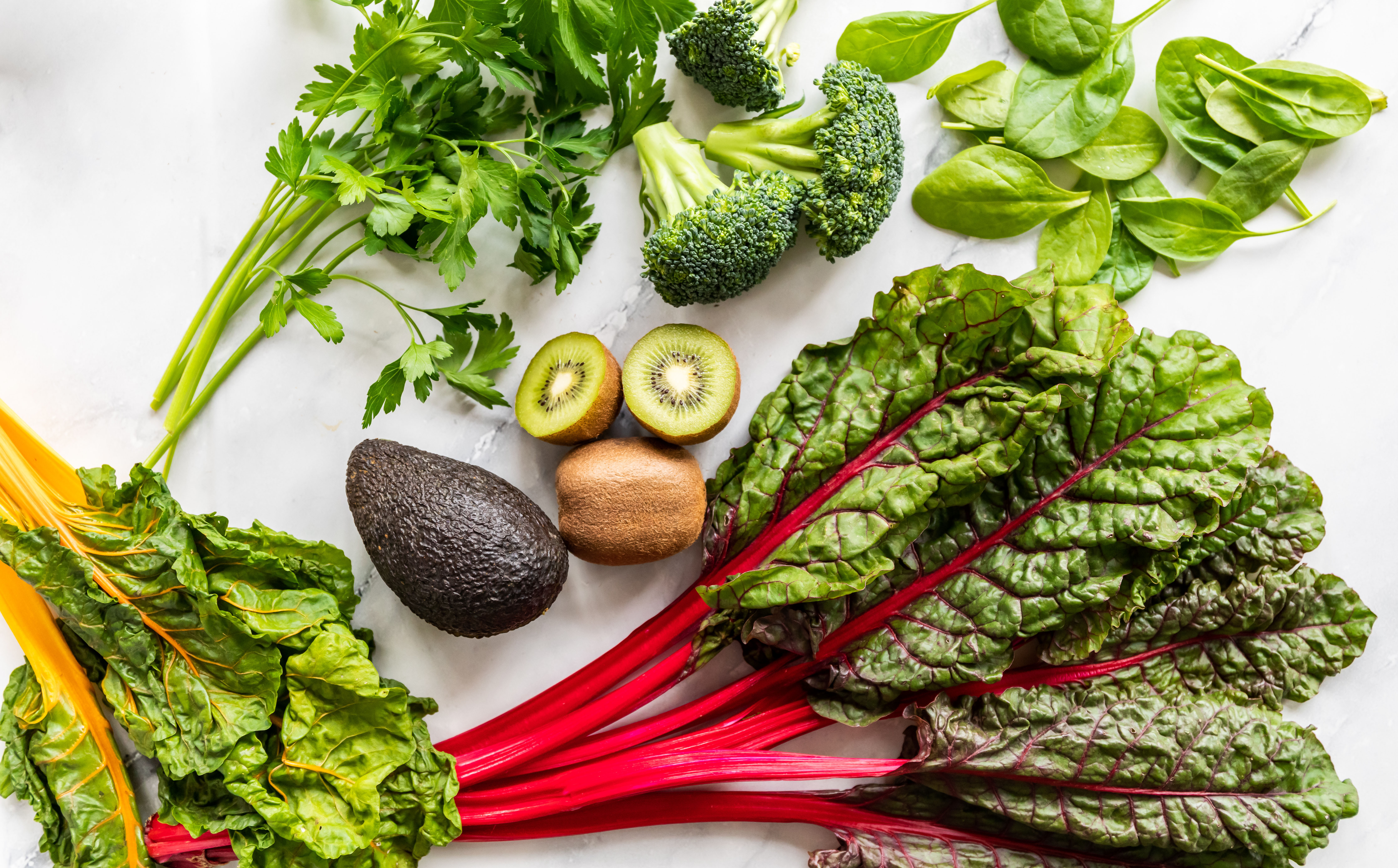 The "K" in vitamin K stands for "Koagulation", which is German for coagulation. As you can probably guess, vitamin K is pretty important for our blood coagulation. It activates the proteins necessary for this process: The so-called coagulation factors. They prevent excessive blood loss in the event of an injury. People with a vitamin K deficiency therefore often tend to show heavy bruising.

However, vitamin K is not only important for stopping bleeding. It also ensures that the blood in our blood vessels can flow properly. Basically, it directs absorbed calcium to our bones and teeth and prevents its accumulation in the arteries. Vitamin K thus prevents calcium deposits in the blood vessels and contributes to the protection against coronary heart diseases.

As already indicated, vitamin K is of great importance for our bone health. In addition to calcium, it plays a role in bone mineralization and is needed for the so-called osteoblasts  the cells that form our bone tissue. Osteocalcin plays a central role here. With the help of of vitamin D3 and vitamin K, this protein is produced by the osteoblasts and supports the formation of bone mass by binding to calcium. It is no suprise that vitamin K has long been used in osteoporosis therapy. 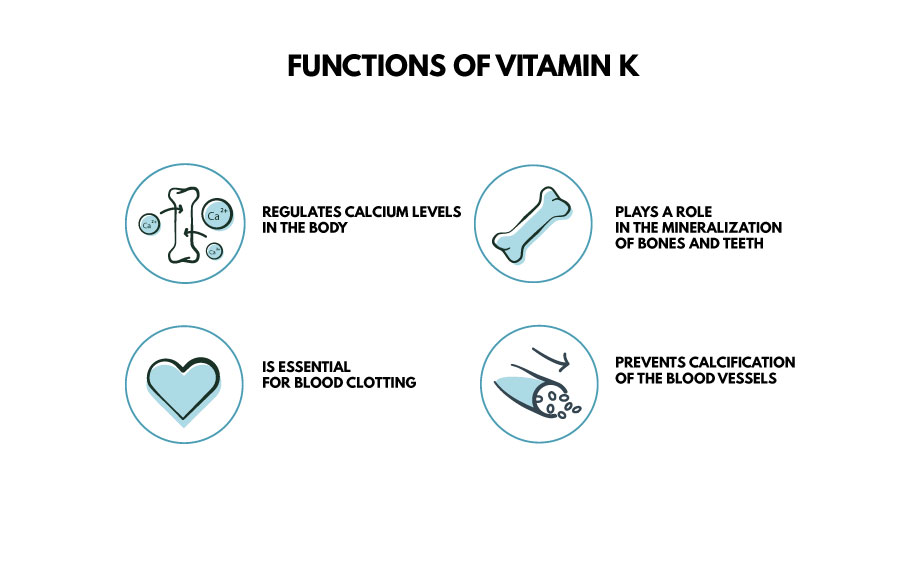 The majority vitamin K we absorb comes from food, includin green leafy vegetables such as spinach, cabbage and lettuce. As already mentioned, these foods contain mainly vitamin K1. However, K2 is the from that is actually absorbed and used much more efficiently by our body. With vitamin K2 there are again two subtypes: The MK-4 and the MK-7 form. These two K2 variants are produced by bacteria and are mainly found in animal foods and fermented products. Menachinone-7 (MK-7) is the most effective of the two forms.

Now it becomes even more complex, because with MK-7 we have not yet reached the end. MK-7 exists in two forms as well, called cis- and trans-isomers. Their names are based on their chemical configuration. From a chemical point of view they differ only minimally, but this small difference has a great influence on their effectiveness. While MK-7 all-trans is considered the most effective form of vitamin K2 with the best bioavailability, MK-7 cis is basically ineffective. 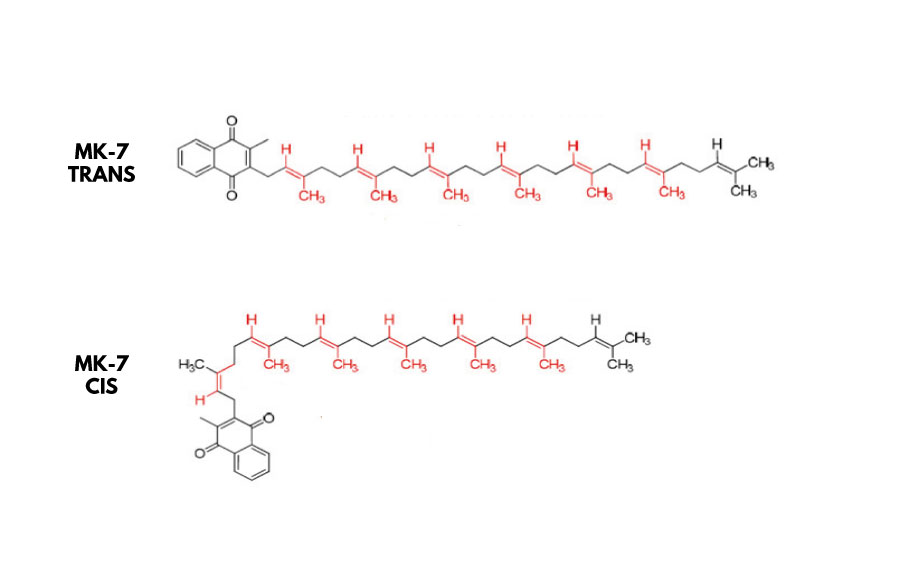 Vitamin K deficiency is a rarity in healthy persons. However, people who suffer from fat metabolism disorders as well as liver and intestinal diseases (e.g. irritable bowel syndrome, Crohn's disease, celiac disease) may be more prone to insufficient vitamin K levels. Signs of a deficiency can be the acute formation of bruises, frequent bleeding of the gums, but also lack of concentration. In these cases, vitamin K in the form of a supplement can be helpful.

Due to the large differences between the various forms, it is advisable to pay close attention to the content when choosing a vitamin K supplement. In many products the majority of the alleged active ingredient is actually ineffective. During the development of our vitamin K2 product, we opted for a special raw material, which is obtained from fermented soybeans (= Natto). Of course, our K2 is the MK-7 form with an all-trans content of over 99% and can therefore be easily taken up and utilized by our body.