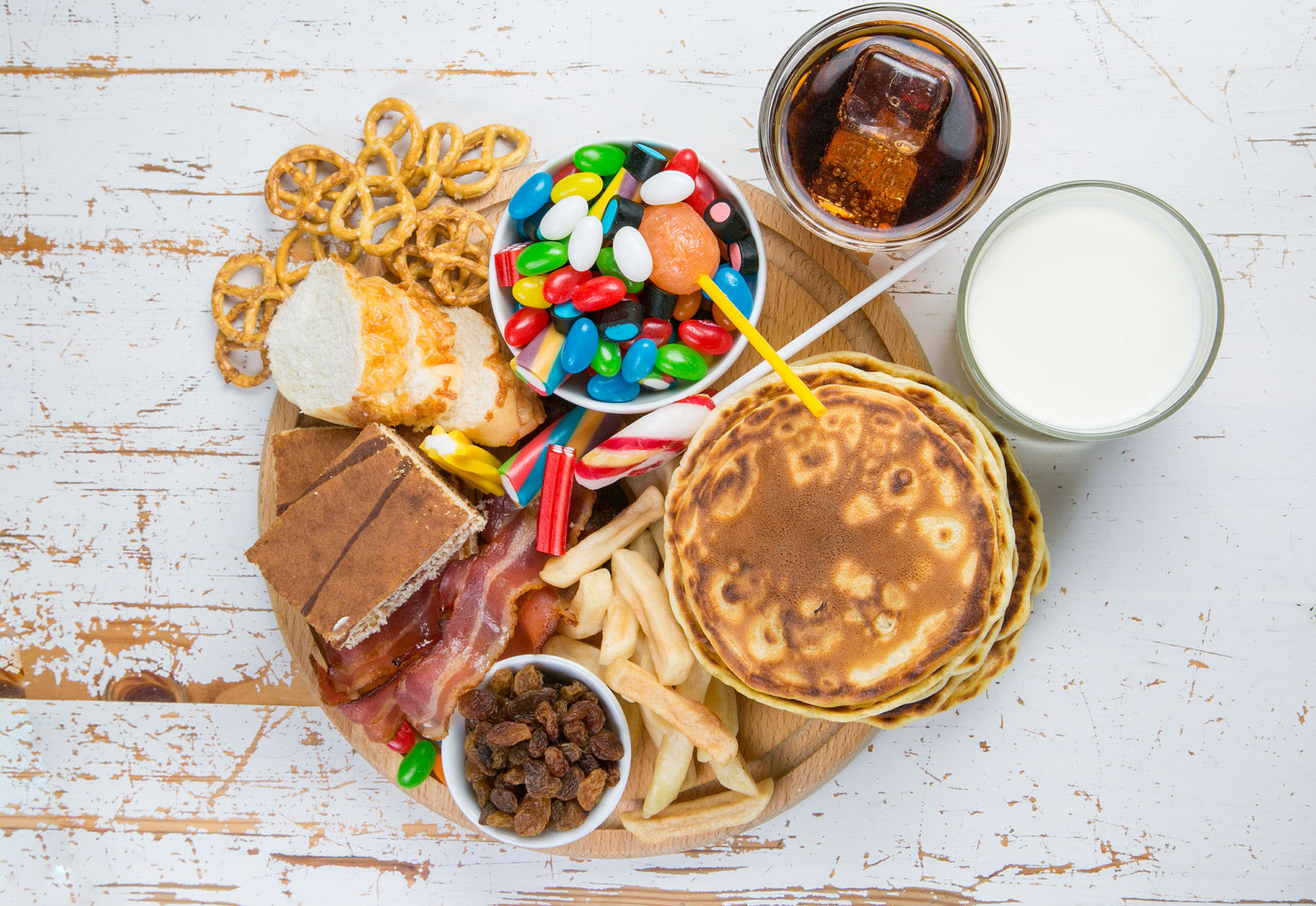 What do we mean by sugar?

By sugar, the WHO (World Health Organisation) means intrinsic sugars, which designates the sugars naturally occurring in food (fruits, vegetables or dairy) and the free sugars, which are monosaccharides and disaccharides added by manufacturers to food and drinks. This definition also includes sugars within honey, syrups and fruit juice.

Why is it a problem to ingest an excessive amount of sugar?

We are getting more and more worried about the fact that the consumption of free sugars  especially the ones we ingest through sweet beverages  raises the global energy  intake and could reduce the consumption of more nutritious foods, which leads to bad eating habits, weight gain and a higher risk of chronic non-communicable diseases.

As Epicentro  the epidemiological portal of public health of the superior health institute of Italy - suggests, In our country, chronic non-communicable diseases are considered, in 2010,  as responsible for 92% of the total registered deaths, more particularly heart disease (41%), cancer (29%), chronic respiratory illnesses (5%) and diabetes (4%). The other chronic non-communicable diseases are the Parkinsons disease, the Alzheimers disease, auto-immune diseases, cerebrovascular accidents, osteoporosis, etc.

The chronic non-communicable diseases are also the first cause of death in the world. In 2012, they were responsible for 68% of all deaths (38 million), while it was only 60% in 2000. Around half of the diseased were younger than 70. The main risk factors are the way of life and the environment where individuals live. Every year, at least 5 million people die because of tobacco and around 2.8 million people die of obesity. Hypercholesterolemia represents around 2.6 millions of deaths while 7.5 millions of deaths are due to hypertension.

According to the latest data of the National Health Observatory, in Italy, more than a third of the adult population (35.3%) is overweight and one out of ten people are obese (9.8%). But the most worrying numbers affect children: three out of ten have excess weight or obesity issues.

Another preoccupation is the link between the consumption of free sugars and tooth decay. Tooth illnesses are the most wide-spread chronic non-communicable diseases in the world. Even though major breakthroughs occurred regarding prevention and the treatment of those diseases during the past few decades, the problem remains. 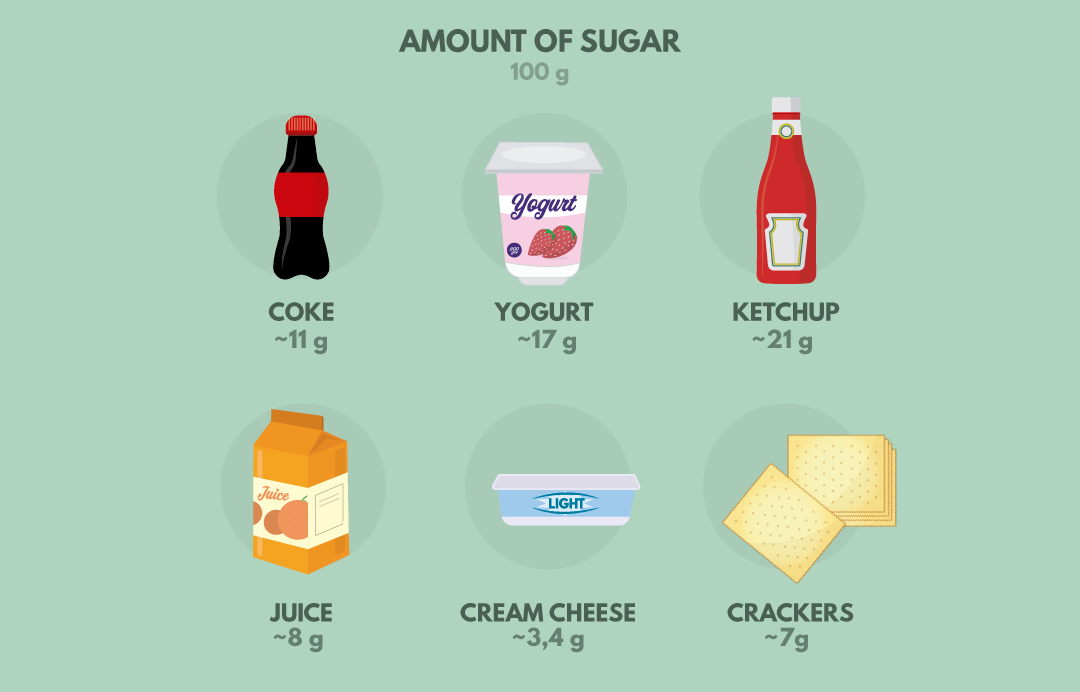 The WHO elaborated recommendations for the daily consumption of sugar depending on our energy needs. The maximum suggested daily amount is 10% of the total calories ingested during the day. However, it would be preferable to reduce to reduce our sugar intake to 5%. We should therefore consume a maximum of 6 tablespoons of sugar per day. Reality tells another story: Italians ingest twice as much as the WHOs recommends; around 100 grams a day (20.7% of the calorie total).

Some countries have decided to take action on the consumption of sweet beverages. The list includes: the UK, France, Ireland, Belgium, Portugal, Finland, Hungary, Mexico, Chile and cities such as Philadelphia and Berkeley in the United States.  They perceive a tax on sweet beverages, or so-called sugar tax, to induce industries to reformulate their products by reducing the amount of sugar they allow and to discourage the consumers who buy these drinks. The UK has initiated this tax in 2018, with the Soft Drinks Industry Levy (SDIL). 18% of sweetened fizzy drinks have been taxed since then. As Food Fact says: During the two years of approbation of the sugar tax law (2016-2018), more than 50% of the manufacturers changed the recipe of their product, inducing a decrease of sugar.

Processed industrial food, such as cereal bars, biscuits or snacks, are important sources of sugar. Fruit juice and sparkling drinks also have a lot of it. What is oftentimes surprising is that sugar also occurs in foods we would normally consider as healthy, such as breakfast cereals and yogurt. Yogurt, for instance, naturally contains simple sugars.   If it is fruit-flavoured, the amount of sugar increases: it is not because of the naturally occurring sugar in fruits, but because the yogurt is sweetened with semi-transformed fruits (such as jams or marmalades).

These sugars are not only added to food in the form of saccharose (more commonly called sugar) but often under the name of glucose, dextrose, fructose, glucose-fructose syrup and maltodextrin. These alternatives are chosen by industrial manufacturers because they are more convenient to make some products. Hence, sugar disappears of the ingredients list. (...) Be careful with similar terms to no sugar added.

That being said, sugar is not only found within sweet foods. It is one of the ingredients of numerous savoury foods to improve their preservation, to make them crunchier or to balance the acidic taste of some foods. Bits of sugar can be found in meats as well, more specifically within cooked ham and turkey slices. Sugar is also a star ingredient of crèmes and canned soups as well as ready-made sauces. Numerous homemade condiments require sugar. For instance, the recipe of homemade ketchup consists of: semi-concentrated tomato (60%), sugar, tomato fibre, alcohol vinegar, salt, concentrated lemon juice, yeast extract, spices.

Moreover, sugar is a close ally of foods defined as light because it is often added to them in order to lighten the use of fats and to maintain an acceptable taste. 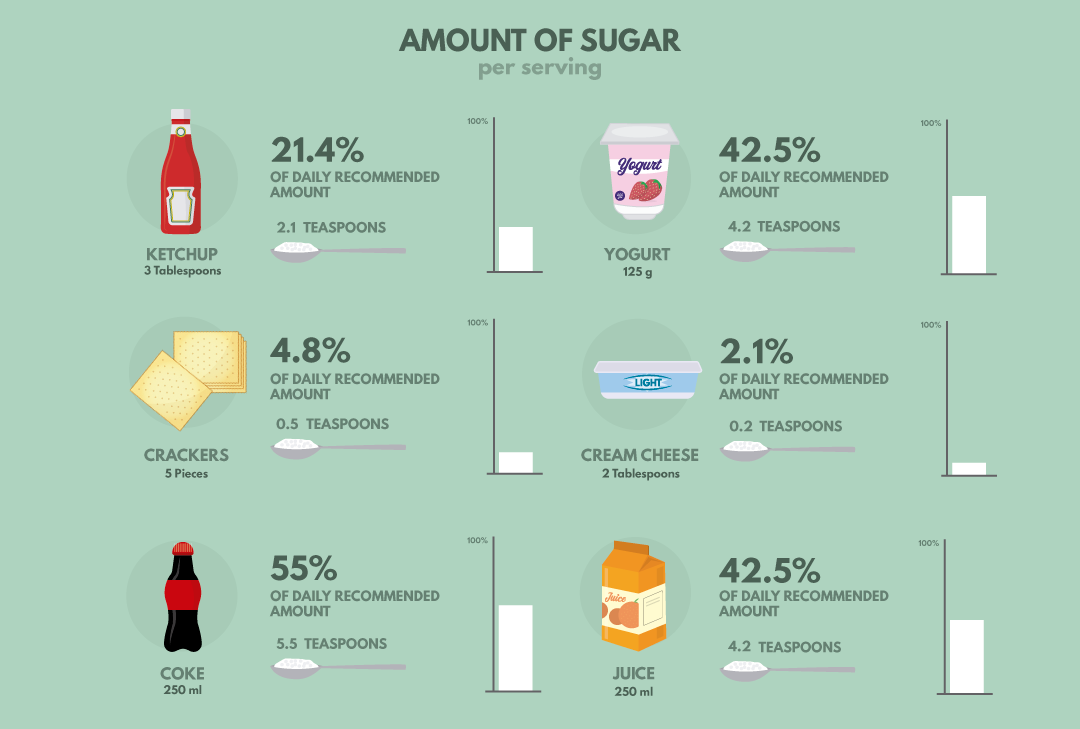 Altroconsumo, an Italian independent consumers association, opened a case upon 110 sweet and savoury products; they have reviewed baby food, condiments, fizzy drinks, breakfast items, dairy products and cacao to measure the amount of added sugar they had. In order to offer a convenient tool to know more about the amount of sugar foods comprise, Altroconsumo provisions everyone with an interactive calculator on its website.

World Health Organization (WHO). 2008-2013 action plan for the global strategy for the prevention and control of noncommunicable diseases ( http://whqlibdoc.who.int/... ).