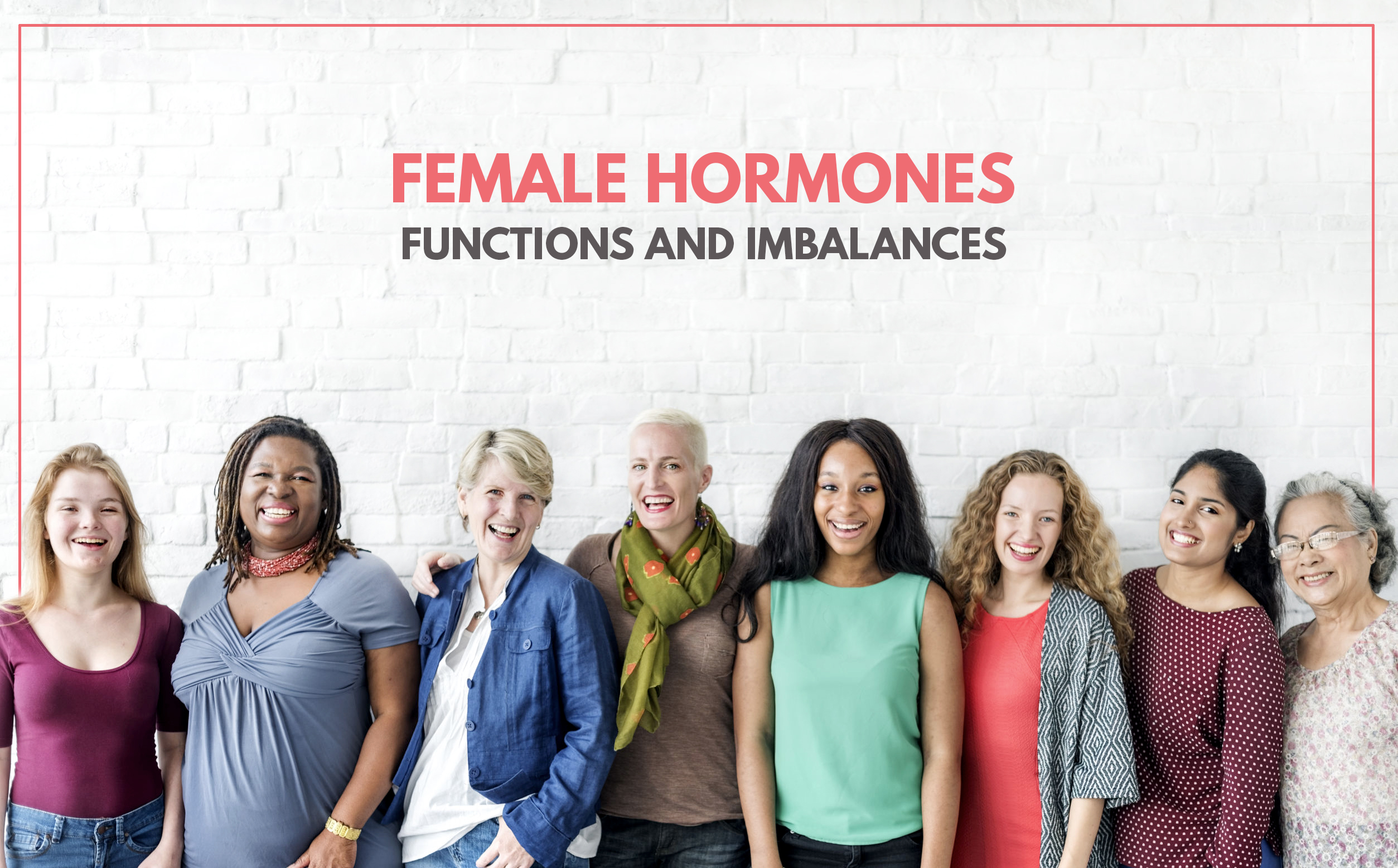 Youve probably heard of the term chemistry between two people before. And perhaps you are even familiar with this feeling. Its like this spark that makes you feel inexplicably attracted to another person.

This chemistry is mostly a result of a hormonal explosion happening inside your body. And hormones are nothing more than bio-chemical messengers that affect multiple body functions, including regulating our sexual and reproductive system.

E for Estrogen, P for Progesterone

With (sex) hormones being involved in so many different processes in the body, you can see their effects reflected in your mood, the health of your skin and hair, your sexual desire, your energy level and so much more.

Since these hormones play a fundamental role in the course of our entire life, it is important to know them, understand how they work and the consequences of having an imbalance in your hormonal system  which affects more women around the world than you may think. 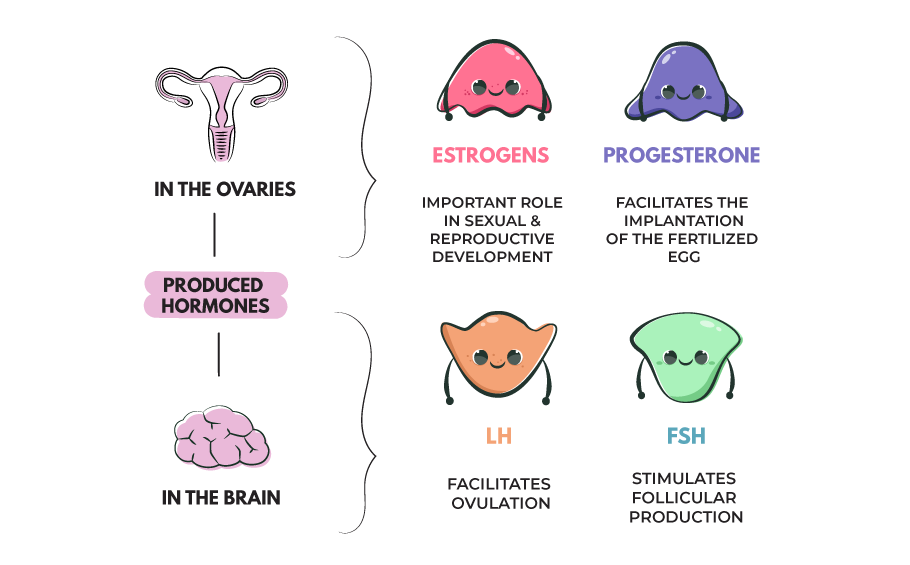 As mentioned, this hormone is predominantly synthesized in the ovaries and in small amounts in the adrenal glands and fat cells. During pregnancy estrogen is also produced in the placenta. Its role in our sexual and reproductive system is very important since its main function is to prepare the female reproductive system to make it fertile.

Nevertheless, estrogen receptors are found all over the body including the brain, breast, pelvic floor and genital tract [1], which makes it clear that this hormone does not only affect our reproductive system but also other parts of the body:

Like estrogen, this hormone is synthesized in the ovaries at the end of ovulation and in the placenta during pregnancy. The development and functioning of the uterus are largely dependent on the work of this hormone.

This hormone, normally associated with men, is also produced in small amounts by the adrenal glands and the ovaries. It influences both libido and regulation of the menstrual cycle [11] and is also associated to bone health [12].

This hormone, although less known, plays a fundamental role in the female reproductive system. It is synthesized in the pituitary gland of the brain and stimulates the production of androgens  male hormones like testosterone  and estradiol, the most potent form of estrogen. One of the most important functions of LH is to facilitate ovulation by causing the release of the egg contained in the follicle.

Like the luteinizing hormone, FSH is synthesized in the pituitary gland and plays a fundamental role in the control of the growth and reproductive activities. It is one of the hormones essential to pubertal development as it stimulates estrogen production and facilitates the maturation of the ovarian follicles. 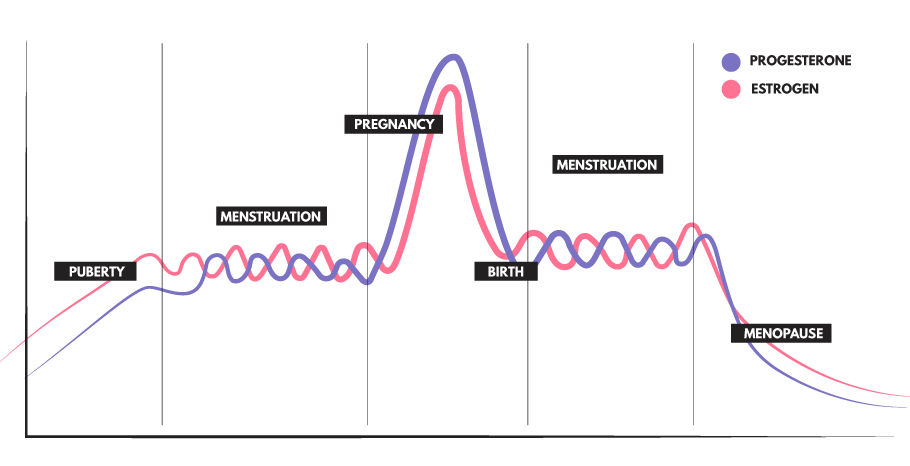 How does hormone production change during a womans life?

During the different stages of female development, hormone levels will undergo natural changes, i.e. during puberty, the menstrual cycle, postpartum and menopause.

Puberty is associated with a significant increase in sex hormones, as it constitutes the beginning of sexual maturation - the transformation from being a "girl" to being a "woman".

Triggered by another hormone called Gonadotropin Releasing Hormone (GnRH), the production of LH and FSH is stimulated to initiate the transformation. Both LH and FSH serve to stimulate the release of the most important female sex hormones, estrogen and progesterone, to prepare the body for the following physical changes:

The menstrual cycle is the monthly process that involves a series of changes in women to prepare the body for the possibility of pregnancy. It lasts approximately 28 days and is divided into 3 phases: follicular phase, ovulatory phase and luteal phase. Each of these phases is repeated incessantly during a woman's fertile years until menopause. During pregnancy it is interrupted to start again after delivery of the baby.

In the first phase of the cycle, which coincides with the first day of menstruation, the production of the FSH hormone is increased. As we have discussed, FSH promotes the growth of the follicles in the ovaries, one of which is destined to ovulate during the menstrual cycle. This follicle containing the egg will begin to produce more estrogen and mature while the others will decay.

This is where LH comes into play, stimulated by the rise in estrogen. LH causes the rupture of the follicle with the consequent release of the matured egg from the ovary, a process we know as "ovulation". At this point (about day 14), fertilization can occur, when the egg travels down the fallopian tube to the uterus for the possibility of being fertilized by sperm. This can only happen within 12 hours after the egg has been released.

This last phase of the menstrual cycle involves the drop of estrogen levels and an increase of progesterone to facilitate the implantation of the egg in the uterus. If the egg is not fertilized, the follicle contracts inside the ovary, the levels of progesterone decrease, and the endometrium is shed and eliminated through menstruation. This completes the menstrual cycle.

In the event of the fertilization of the egg, pregnancy can take place. The released and fertilized egg attaches to the walls of the uterus which then begins to produce the hormone chorionic gonadotropin (hCG), known as the pregnancy hormone. This is the hormone that a pregnancy test measures. It prevents the uterine lining from being shed so the woman does not have a period. It also promotes the production of progesterone so that the uterus continues to develop and widen for the growth of the fetus.

Estrogen levels also increase steadily during pregnancy to improve vascularization (the formation of blood vessels) and transfer of nutrients to support the developing baby. From the 4th month of pregnancy, the placenta is taking charge of the main production of estrogen and progesterone. Also, other hormones come into play in the course of pregnancy.

At the end of the pregnancy, hormone levels change dramatically again to gradually adjust to normal levels. These hormonal variables are what lead to the so-called "postpartum depression".

This is the last stage of the female development; it happens around the age of 50 and is usually determined by the natural disappearance of menstruation. The changes of menopause are preceded by the perimenopause, which is characterized by irregular menstrual cycles. The physical changes of perimenopause are caused by hormonal alterations, particularly variations in the level of estrogen and progesterone.

As these hormones decrease, the vagina becomes less lubricated, libido decreases, and sleep disturbances can occur more frequently. Eventually, ovarian function ends, and a woman is no longer fertile.

Weve discussed the normal changes in hormone levels from puberty to menopause. However, hormonal imbalances can also occur due to external factors such as the use of hormonal contraceptives, diet and obesity [10]. And those imbalances may in turn cause symptoms ranging from anxiety, muscle pain, water retention, irritability, fatigue, premenstrual discomfort, acne, weight changes, hot flashes to the development of polycystic ovary syndrome (PCOS) [13].

If you want to learn more about the symptoms you can experience if you suffer from hormonal imbalance and how to avoid them visit our next blog.

[6] Stachenfeld, Hormonal changes during menopause and the impact on fluid regulation. Reprod Sci. (2014) 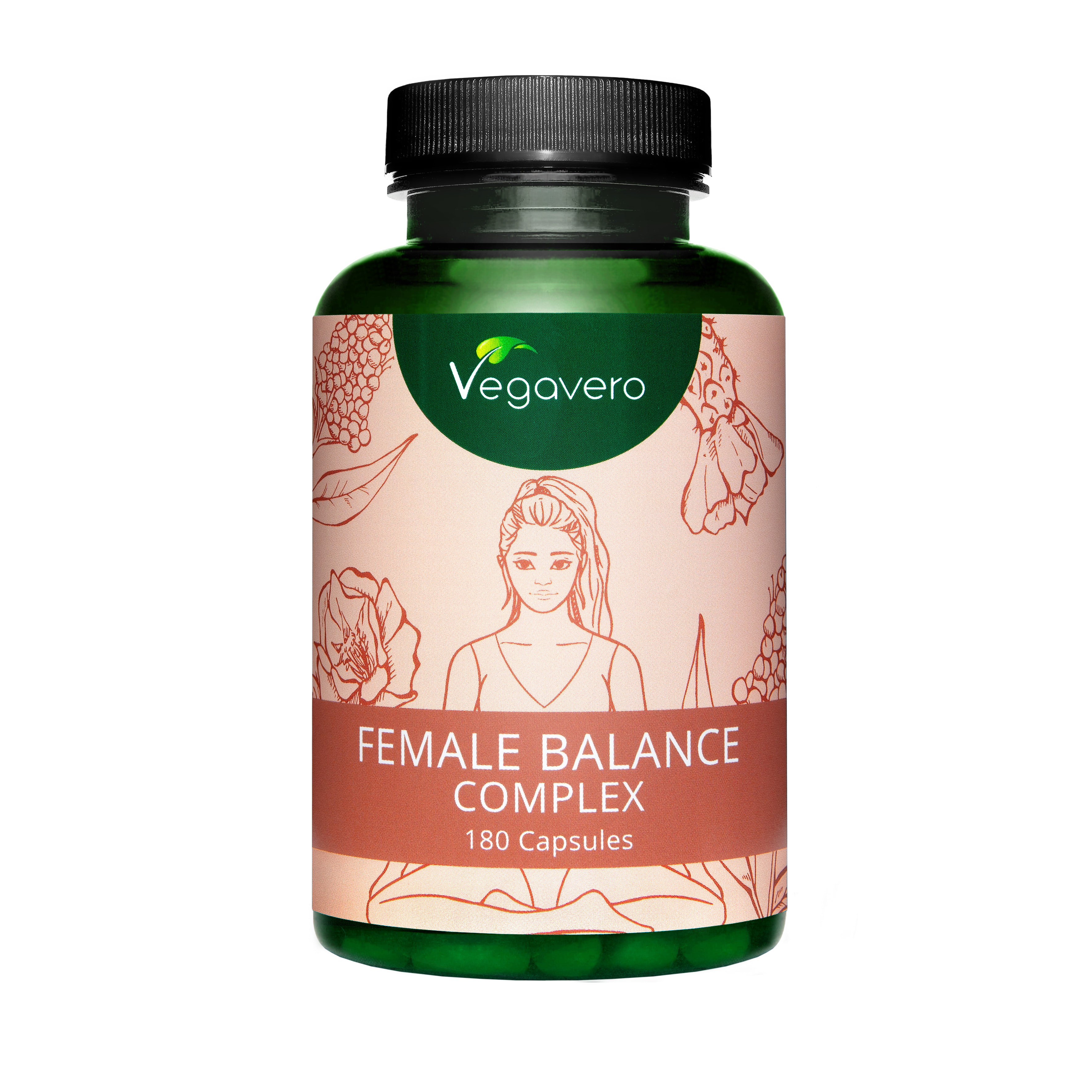 Quercetin - A Versatile Plant Pigment
Quercetin belongs to the group of polyphenol flavonoids - these are secondary plant substances that are responsible for different color formations in plants. People who are active in sports and those who are plagued by allergies can especially benefit from quercetin.
8 tips for healthy sleep
We spend around a third of our lives asleep. However, many people find it difficult to get to sleep, or to sleep through the night. Those who sleep less, or sleep badly, are often struggle with concentration throughout the day, have lower energy levels, and are more prone to health problems, such as hormonal imbalances, and becoming overweight. The following tips reveal how we can make sure we are as rested as possible during sleep, and which practices and nutritional supplements can help with this.
Veins  the pipelines of life
Veins run through our entire body, and work in conjunction with our heart. They are the blood vessels that carry blood to the heart. But although they are so important for our body, it is thought that between 20-60% of the UK population suffer from some form of vein weakness. So, what is the cause, and what can be done to combat it?
Cystitis: how to get rid of it in a few simple steps
A burning sensation while urinating, the frequent urge to go to the bathroom and even blood in urine can be signs of a urinary tract infection, also called cystitis. In our blog article we discuss the causes of cystitis and point out ways to prevent and treat this frustrating condition.
News overview
Nutrition & Health Beauty & Wellness
Please login to comment.